After 22 years, the death of rapper Tupac Amuru Shakur still remains shrouded in mystery. Several films and documentaries have attempted to shed light on the controversial artist’s last moments, with none of them giving fans a definitive breakdown of how the West Coast king lost his life.

Here’s what we do know: Shakur and Death Row Records co-founder Marion “Suge” Knight arrived in Las Vegas Sept. 7, 1996, to watch their friend, boxer Mike Tyson, take on Bruce Seldon at the MGM Grand. Tyson, who walked out to 2Pac’s “Let’s Get It On,” knocked out his opponent in the first round.

As the Shakur and his entourage were leaving the arena, Travon Lane, an associate of Knight’s, whispered something to the rapper. Lane and Shakur then took off, with ’Pac’s bodyguard, Frank Alexander, following close behind. By the time Alexander caught up, the “Hit ‘Em Up” rapper was mid-fight with known Los Angeles gang member Orlando Anderson. The South Side Crips, Anderson’s gang, were known rivals to the Mob Piru Bloods, who were associated with Knight. Hotel security broke up the melee, which was caught on tape by security cameras.

The “Bomb First” MC and his entourage then returned to the Luxor, their preferred hotel, to get ready for a night out at Knight’s nightclub, 662. As security, Alexander was prepared to ride in the same car as the Juice star, but ’Pac insisted he drive rap group the Outlawz to the venue in girlfriend Kidada Jones’ car instead.

After tossing Jones’ keys to Alexander, Shakur hopped in the passenger seat of Knight’s BMW and took off. His security was close behind. 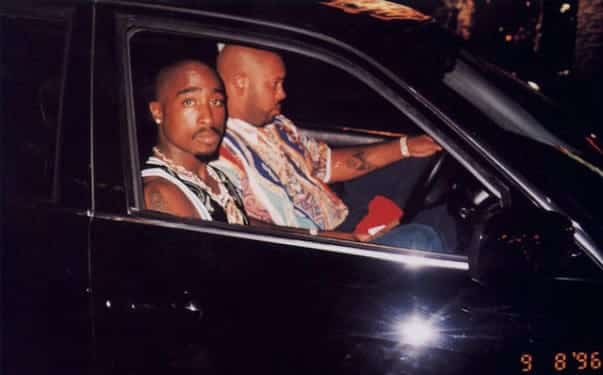 Shortly after 11 p.m., a white Cadillac pulled up next to Knight’s vehicle and fired 14 shots into the passenger side of the car. Alexander pulled over and jumped out of his car, but Knight made a U-turn and sped off. One of the shots had struck Knight’s tire, causing it to blow out and forcing the label head to stop his vehicle.

Shakur was shot four times: twice in the chest, once in the arm and once in the thigh, according to MTV News. Knight suffered a head injury from bullet fragments.

Chris Carroll, the retired Las Vegas police sergeant who was the first officer on the scene, told E! News Knight jumped out of the vehicle, “running around yelling, blood flying out of the side of his head but he’s acting like he’s not hurt at all.”

Carroll hoped the “Hail Mary” rapper would be able to identify his killer.

“We have something called a dying declaration, where if someone is able to tell you, while they’re dying and they believe they’re going to die, who killed them, that’s admissible in court. It’s not hearsay. So, I asked him, ‘What happened? Who shot you? Who did this?’ And he was just kind of ignoring me. He was trying to yell back and forth to Suge. Suge was yelling at him, ‘’Pac, ‘Pac!’ he kept yelling, and Tupac was trying to yell back but he couldn’t really get a breath together.

“I was still trying to ask him who shot him, what happened, and finally he went from kind of swirling and trying to yell at Suge to all of a sudden in an instant going to a feeling like he couldn’t do it anymore. And he just kind of went back and…I could just see him going into a relaxed state. And he looked at me and I thought I was actually going to get some cooperation, and he got a breath together and I said, ‘Who did this?’ He looked at me and he went, ‘F*ck you.’ And that was it.

“After he said that, his eyes rolled back in his head, he was gurgling, and he never regained consciousness again.”

Shortly before midnight, Shakur was taken to University Medical Center – Las Vegas, where he had his right lung removed. He remained in intensive care until passing away six days later, on Sept. 13, 1996.

Although some assume associates of the gang member ’Pac fought earlier in the evening (or Anderson himself) are guilty, many placed blame on Brooklyn rapper The Notorious B.I.G., who was engaged in an “East Coast vs. West Coast” battle with the rapper at the time of his death. Biggie, who was killed six months later in Los Angeles, spoke about Shakur’s death during his final interview with BET’s Rap City.

“I was more shocked than anything…’Pac is a strong dude, you know what I’m saying? I know dude. He’s real strong, so when he got shot, I was just more like, ‘again?’ He always gettin’ shot or shot at, he gon’ pull through this one again, make a few records about it, and it’s gon’ be over! When he died, I was just like, ‘woah!’ Even though we was goin’ through our drama, I would never wish death on nobody, ‘cuz ain’t no coming back from that.”

The Netflix documentary Unsolved: The Tupac and Biggie Murders is the latest film to examine the MC’s death. In it, rapper Keefe D admits to being in the car with the killer but refuses to give up a name. Keefe is also Orlando Anderson’s uncle. Anderson himself died in 1998 in a gang-related shooting, according to Hip Hop DX.  The Daily  Star reports executive producer Kyle Long still believes Keefe’s confession should be pursued by authorities.

“He went live on television and confessed to being an accessory to murder and the Las Vegas PD, as far as I know, is doing nothing about it,” said Long. “I just think it’s outrageous.”

Twenty-two years after his death, fans may never know for a fact who took the icon’s life, but they can expect at least one more documentary hoping to tie up the loose ends. NME reports 12 Years a Slave filmmaker Steve McQueen is slated to direct a new doc that has been authorized by Shakur’s family.

“I am extremely moved and excited to be exploring the life and times of this legendary artist,” McQueen said. “I attended NYU film school in 1993 and can remember the unfolding hip-hop world and mine overlapping with Tupac’s through a mutual friend in a small way. Few, if any, shined brighter than Tupac Shakur. I look forward to working closely with his family to tell the unvarnished story of this talented man.”