Slaves Strike Back: Will you go Underground?

One of the reasons why the 1977 miniseries Roots made such an impact is because it was literally the first time the story of slavery from Africa to America had been seen on television in that way.  It gave many their first education into the horrors of slavery.  Fast forward to 2016, while there have been many iterations following slavery in America – none have told the story that WGN’s new drama Underground is aiming to tell.

Created and executive produced by Misha Green and Joe Pokanski , Underground follows revolutionaries of the Underground Railroad who use their ingenuity, power and perseverance to attempt to escape a Georgia plantation.  The 10-episode series, directed by Anthony Hemingway (Red Tails) focuses on a group of courageous men and women who band together for the fight of their lives—for their families, their future and their freedom.

Smollett-Bell, who stars as a house slave named Rosalee and whose brother Jussie will be appearing in two episodes of Underground, spoke passionately about the project.

“Underground is one of my most proud works.” She said.  “I’m just so proud of being a part of a project that tells a different side of our history.  That shows us as revolutionaries.  That shows us as revolting and rebelling.  And it’s a story that hasn’t been told.  The Underground Railroad is one sentence in one paragraph in our history books.  And they sum it up to one person: the amazing legend of Harriet Tudman.  But there were thousands of people who risked their lives who were actively changing our nation.”

Discussing the atrocities of slavery isn’t easy.  Watching it is even harder.  Now imagine portraying a slave.  That’s where co-stars Aldis Hodge (Straght Outta Compton) and Amirah Vann (Girls) were most challenged.  There were moments for both actors when things became just too overwhelming.

“There’s one scene and I remember we started it and I was done.  I was sitting there with Jurnee.  And I said ‘Jurnee I just don’t want to be a slave today.  I don’t want to look down.  I’m like why are we here?’”

She explained that it was Jurnee Smollett-Bell, her TV daughter, who kept her motivated.   “She had Bullwhip Days on her lap, one of the books that we had both been reading. And she just tapped it.  And literally that’s all we needed.  It immediately took me out of myself and I said ‘oh it’s not about me.’ It’s about honoring them.”

Hodge, who plays captured slave Noah, had a similar experience. 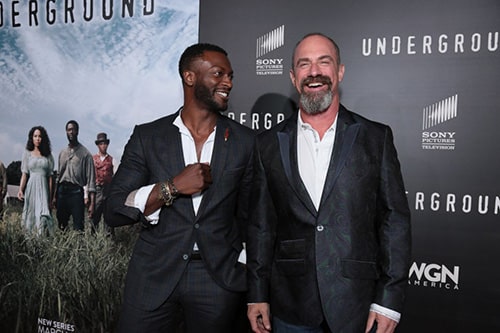 “In the very first episode there’s a scene where Noah has been captured from trying to run and he has to face the consequences.  That for me was tough because I had to deal with understanding that people lived this life.” He said.

“They woke up in the morning dealing with danger.  Every step they took was dangerous and at times like this in this situation you have to deal with choosing the lesser of two evils.  ‘Don’t kill me beat me.’ And that’s something I was like how do I go through this and feel proud and dignified for being what I am?  I’m not good with groveling.  There was a way to do it and I understood Noah’s reasoning for it, which helped me get through it all.”

No doubt, some scenes of Underground will be hard to watch.  But Mykelti Williamson, who appears as a one-eyed preacher named Moses, says it’s in those moments that the real story is getting told.

“When Roots came out it was amazing, it was far ahead of his time and Mr. Haley was subjected to a lot of censorship.   There were things he wanted to share that he couldn’t.  This young Black woman, Misha Green, and her partner Joe Pokaski as well as this director Anthony Hemingway, they had WGN’s full support.  There are some things you’re going to see, we don’t hold back.  So it’s going to go beyond what we experienced when we saw the very first Roots.”

From 2012’s Django Unchained and 2013’s 12 Years a Slave to the upcoming remake of Roots and Nate Parker’s Nat Turner tome Birth of a Nation, some have expressed a frustration with what they consider an oversaturation of the depiction of slave life and want to move past these stories.  For this, entertainer Sheryl Lee Ralph, who does not appear in Underground, but came to show support at the premiere says: “wake up.” 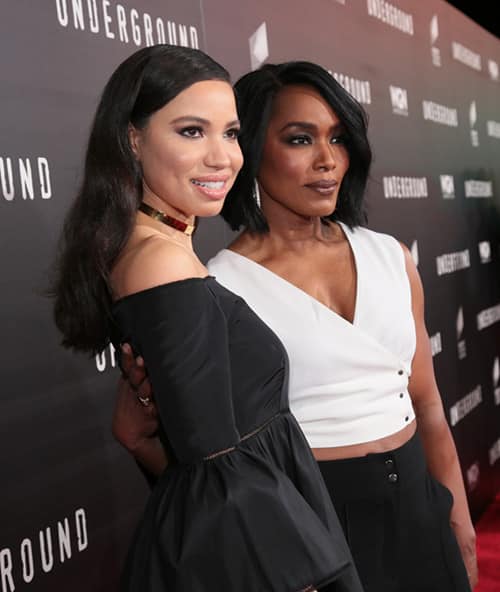 “Yes it hurts us because it really happened, because Saturday night fun used to be your relatives swinging from a tree.  We know that.  Wake up! Tell the truth so somebody will see, guess what, you are not invisible. You are right here and your pain matters just like your life matters!”

The music in Underground is just as integral to the series as the cast.  That’s why John Legend was tapped to oversee the score and soundtrack.

“From the start we said we wanted to be bold with the music and really push the bar,” Green explained. “We were writing songs right into the script. Then John Legend came along and really helped us.  And then Raphael Saadiq and Laura Karpman who were our composers really wanted to push the bar too, mixing contemporary synths and bass with traditional hymnals and it is just so exciting to see it blend together.”

She left us with one final thought about Underground and that is, “It’s not about the occupation it’s about the revolution.”

While Jurnee Smollett-Bell revealed what she wanted viewers to feel after watching the first episode, which premieres, and that is in one word. Bold.

Underground premieres Wednesday, March 9 at 10 p.m. on WGN America. Watch our  video interview with the stars at the JPC offices in Chicago HERE.

Crystal Shaw King is a seasoned TV, radio and online entertainment writer. She’s also a contributing editor for a social justice foundation in Los Angeles. Follow her on Twitter @crystalamberbam.