One White former Trump model thought it was OK to refer to Van Jones as a “house n***er” while assailing his views of Donald Trump.

Ariane Bellamar, who describes herself as an actress and activist on Twitter, posted the remarks to her social media account following Jones’ appearance on CNN. Her bio also says she’s been “#BlockedByTrump.” 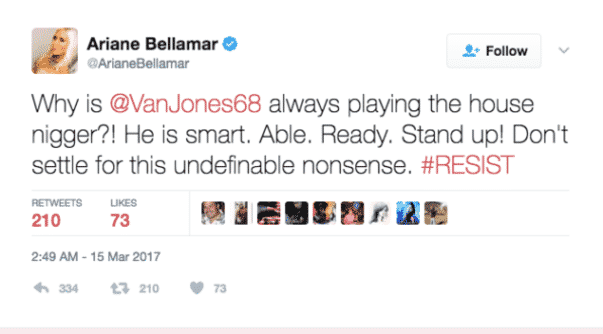 On the segment, Jones discussed the release of President Trump’s 2005 tax returns. Earlier that day, Rachel Maddow claimed to have had them in her possession.

“If all we get tonight is that Donald Trump paid $38 million to America’s government, that’s a good night for Donald Trump,” Jones said. “I’m sorry, but there’s just really no way—I was hoping and praying that it would show not only did he pay no taxes, he actually charged the government and got money back.”

The Tweet came at 2 a.m., but the slow drag Bellamar received lasted well into the day.

So @ArianeBellamar tweeted house nigger at Van Jones. Don’t come back & tell me she didn’t know what she was saying or that it is offensive https://t.co/buwLL977Xx

.@ArianeBellamar You realize you’re racist right? Whether you agree with Van Jones or not, you’re displaying your own bigotry quite openly pic.twitter.com/pJCcPEEAOy

I’m expecting Ariane Bellamar to play the victim role next and claim she is being bullied. She is unapologetic about using the n-word.

Bellamar initially expressed that she had done nothing wrong, and insisted that she was not the “enemy.”

@rodimusprime Using an offensive word does not make me the enemy. I have committed MY LIFE to race equality. Go after the real racists.