Washington, D.C., will be the site Saturday of the Unite the Right 2 rally, where White nationalists and White supremacists will gather to “protest civil rights abuses in Charlottesville,” according to the Cut.

The rally will fall on the first anniversary of the deadly event that occurred last year in Charlottesville, Va. Counterprotester Heather Heyer, 32, was killed after a car was driven through a crowd. James Alex Fields Jr., 21, a self-professed Neo-nazi, has been charged with federal hate crimes in her death.

About 400 people are expected to attend this year’s event at D.C’s Lafayette Square, just outside the White House, according to organizers. Hundreds of counterprotesters are anticipated as well.

Several organizations such as Black Lives Matter Charlottesville, Maryland Antifa and the D.C. Antifascist Collective have come together to hold their own rally spanning the entire weekend called Shut It Down D.C., according to DCist.

“This is for Heather Heyer, ICE abolition, open borders, dismantling the prison industrial complex, and ending the settler colonial system. We will confront fascism, antisemitism, Islamophobia, white supremacy, and state violence on August 10-12,” its website reads.

Jason Kessler, the organizer of Unite the Right 2 and the planner of last year’s rally, had plans to hold the second event in Charlottesville but abruptly withdrew his bid last month.

The National Park Service, which approved Kessler’s D.C. rally in June, said it has to honor First Amendment events and is putting its faith in the police to keep everyone safe. “We are confident in the ability of our law enforcement officers to be prepared,” National Park Service spokesman Mike Litterst told ABC 12 in July.

D.C.’s Metro system shelved a plan to provide separate trains for White nationalists after outrage from people saying White nationalists were receiving special treatment, according to The Washington Post.“Metro will not be providing a special train or special car for anyone next Sunday,” Metro Board Chairman Jack Evans told the Post last week. 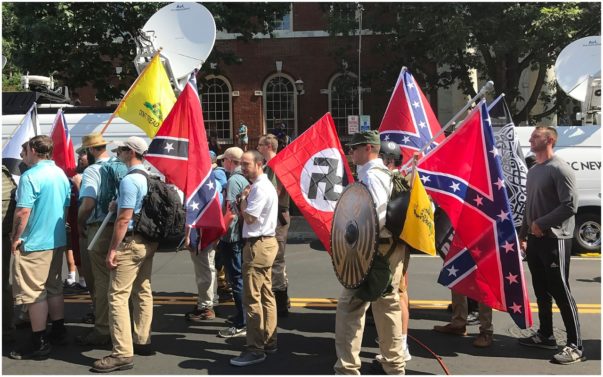 “More than 80% of [the transit union]’s membership is people of color, the very people that the Ku Klux Klan and other white nationalist groups have killed, harassed and violated,” a union rep for ATU Local 689 told ThinkProgress.

Hospitality company Airbnb announced that anyone using its service and attending Unite the Right 2 would be in violation of its policies, according to ABC News.

“When we identify and determine that there are those who would be pursuing behavior on the Airbnb platform that would be antithetical to the Airbnb Community Commitment, we seek to take appropriate action, which may include removing them from the platform,” the company said in a statement to ABC.

Politicians have spoken out against this year’s event, saying that its antithetical to their beliefs.

“Hate has no place in our society, and these white supremacists and the racism and bigotry they spew are not welcome in our state—today, this weekend, or ever,” Maryland Gov. Larry Hogan said in a statement to WBALTV 11 on Friday. “As we face this invasion of vile and perverted ideology infesting our region, we stand united in our conviction that a diverse and inclusive Maryland is a stronger Maryland.”

Virginia Gov. Ralph Northam declared a state of emergency because of smaller rallies in Charlottesville that are planned this weekend, according to the Cut.

“Virginia continues to mourn the three Virginians who lost their lives in the course of the demonstrations a year ago,” Northam said. “We hope the anniversary of those events passes peacefully.”

Following last year’s violence, in which White supremacists and protesters clashed, a Black man was attacked and Heyer was killed, President Donald Trump’s response was:  There were “some very fine people on both sides.”

Trump has yet to comment about this weekend’s demonstration.