Will Packer Talks 'Breaking In,' Teaming Up With Oprah & HBCU Pride

EBONY recently chopped it up with producer Will Packer to discuss his latest film, Breaking In, the future of Hollywood, teaming up with “Mama O,” what he learned from his days at FAMU & more. 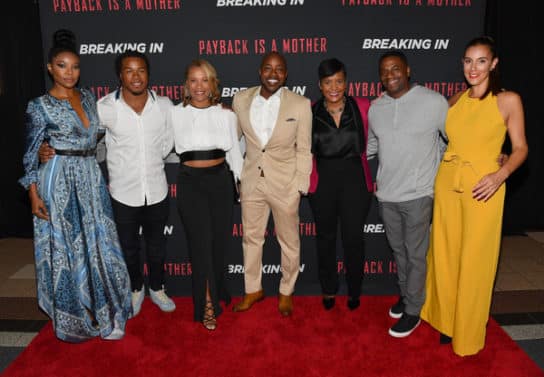 You’ve worked with Gabrielle Union several times before. How did she attack this film differently than others from your point of view?

There’s a different level of physicality that this role required, which Gab does very well. In real life, that’s part of her skill set. She’s super in-shape, super physical, very capable, but she hadn’t really shown that side of herself on screen! Not since Bad Boys 2, to be honest.
We were on the set of Being Mary Jane when I first brought the idea of this project up to her, and she flocked to it because she hadn’t done anything like this in a while. I liked the concept, because it was a flip on the traditional “home invasion” movie. This time, our heroine has to break into the highly fortified house instead of trying to break out. I thought that was really cool.

There’s a common Hollywood phrase, ‘never work with children or animals,’ but these two young actors, Ajiona Alexus and Seth Carr, who play Gabrielle’s kids did an amazing job! How was it working with these two who have their entire careers ahead of them?

The thing that excites me the most about this industry is the future of the industry and where we’re going. We’ve come along way, we’ve made a lot of progress, but I look at the future. That will be defined by the next generation of directors, storytellers and actors, and these two are definitely a part of that next generation.

Ajiona and Seth, they are extremely talented. This wasn’t the easiest shoot from a production standpoint. You’ve got long hours, it largely takes place at night and it’s an emotionally draining movie because these characters are under direst for 90% of it! That’s a lot to put on a grown, adult actor, much less a child. They did very well and held their own. I see bright futures for both of them.

With so many successful films attached to your brand at this point, do you still have doubts or expectations as to how they’ll be received?

I wouldn’t say I have doubts, but I’m definitely not taking anything for granted, that’s for sure. I still very much understand the importance of making quality projects that will stand out and that are reflective of specific audiences, that’s very important to me. I totally don’t think just because my brand is a part of something that it will automatically make a bunch of money or be received in an amazing way.

I do think I have a good track record and have reached a level of success that allows audiences to give a Will Packer movie a chance, and I love that. Then, it’s up to me and my team to deliver.

When you’re reading a script or listening to a pitch, what is it about a story that lets you know as a producer that there’s a good chance it will have broad appeal without sacrificing those niche qualities that you know will connect with your target audience?

I try to do the most authentic version of the movie that I can while telling the story in a universal way. I don’t worry so much about crossing over or, ‘will it play in Iowa?’ you know? I just try to tell authentic stories. I know who my core audience is and I try to do films that they’ll find enjoyable.

Hopefully, if I do that well enough, it will expand to outside the core, but I really just want to make films that feel inclusive, not exclusive. I don’t want to make a movie where people see it and think, ‘this isn’t for me.’

What led you to create Will Packer Media?

I was having a lot of success with theatrical feature films, but I realized not every film was meant to be a full-length, theatrical feature. My audience is consuming media across multiple platforms, and I realized I need to be a part of that. It gives me a leg up because now, when I come across a great idea, I don’t have to think of it as, ‘Is this a Breaking In, or is this a Girls Trip?’ I can think of it as, ‘Is this scripted television, unscripted television, a digital series, a limited series,’ I’ve got a lot of different ways to think about the positioning of projects. I can produce a wider range of content now.

Speaking of which, how did your partnership with OWN come about? I know you have two new shows coming to the network.

I do, and I’m so, so excited to be working with Oprah and her team. This is part of a first look arrangement that I have with OWN through Will Packer Media and it was one of the first deals we announced. Oprah, obviously, has amazing taste and knows what audiences want and what resonates with them. She’s been doing it forever and is better than anyone, and that’s the type of person you want to be in business with.

We’re bringing an unscripted project, which will be a dating show, this fall as well as a drama series that will be on air in the Spring. I’m really looking forward to a long and fruitful relationship with mama O’s company.

Can you tell me how your Florida A&M education has influenced and impacted your career?

I always say, ‘everything I needed to know, I learned at an HBCU, FAMU specifically!’ My HBCU education instilled in me a confidence that said, ‘I am enough.’ When I first began navigating Hollywood, which can be quite challenging, cut-throat and competitive, I’d already done all of that, I’d already experienced it, but I did so in an environment where I felt nurtured and capable of succeeding no matter what the challenge was.

It really instilled in me a level of confidence that I still pull from every day.