These days, it’s not unusual to find menus, brandishing special dietary options for vegetarians, vegans and other ingredient-conscious consumers. According to the USDA, Americans, on average, are becoming much more health-minded with their diet selections. While this is a bit of a new phenomenon in the American home, whole eating has always been a way of living for Grammy Award-winning reggae artist turned recent cookbook author Ziggy Marley.

“I love to cook and eat healthy and so do my family and friends, so I thought, let me get together with family and friends and [come] up with our favorite recipes and share them with the world,” says Marley about his recently released Ziggy Marley and Family Cookbook. 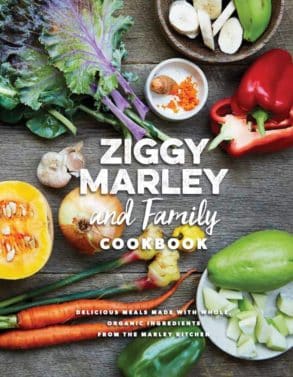 As the eldest son of music legend Bob Marley, Ziggy Marley grew up with an appreciation for a plant-based fare through his father’s Rastafari religion. He would also combine other family influences from his aunt’s traditional Jamaican Sunday dinners to the Middle Eastern flavors introduced to him by his Israeli wife Orly. Already the owner of a GMO-free line of coconut oils and hempseed snacks, the long-time foodie thought his next obvious progression should be a family cookbook.

In the cookbook, Marley includes a spectrum of his family’s favorite recipes from jerk chicken and curry escovitch to hummus and falafel. He also includes vegan recipes, such as hempseed pesto and lentil soup. There is even a section dedicated to fruit and vegetable based juices as a nod to his father’s fondness for juices, greens and nuts. Marley says the Rasta culture impressed upon him the benefits of simplistic, organic farm-to-table foods.

“Ital food is a Rastafarian term that means more natural ingredients, less salt, no artificial flavors and a more natural way of cooking (i.e steam instead of fry),” he says. “We see eating Ital food as a way to be one with nature and also as medicine for the body.”

Throughout the 54-recipe cookbook, several childhood memories and anecdotes illustrate both his love for family and passion for clean food. As Marley offers readers a glimpse into his family’s kitchen, he prefaces it with the encouragement to “Cook and live life through purpose.”

Nina Reeder is a professional journalist, who has worked as senior editor at Upscale magazine and contributed to publications and outlets, such as EBONY magazine, AOL.com, Marriott Hotels, BMWK and more.