Denzel Washington Talks Lovin' On Pauletta for 35 Years: She Makes Our House a Home

Denzel Washington has been a Hollywood heartthrob since the mid-’80s. He’s also been happily married to his wife, Pauletta, since 1983, recently sharing just how much he loves and appreciates his queen after celebrating 35 years of marital bliss this past June.

When asked what’s the key to maintaining a marriage, Denzel Washington jokingly told PEOPLE, “I do what I’m told. I keep my mouth shut!” 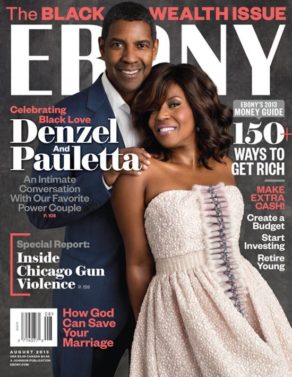 He went on to praise Pauletta Washington for being the ideal wife and mother to their children, listing just a few of the things he appreciates about his better half.

“There’s too many things! What pops into my head: security, food, a beautiful home. The difference between a house and a home, it’s a big difference. You can buy a house, but that doesn’t make it a home—and not to say a man can’t make a home a home, but my wife has made our house a home, and raised these beautiful kids [John David, 33, Katia, 30, and twins Olivia and Malcolm, 27] and protected them and sacrificed for them, she did the heavy lifting.”

The Equalizer 2 star even got specific in which of his wife’s dishes he loves most.

“She has a few [specialties]. I’ve been eating her curry chicken since I’ve known her,” he said. “I used to make it, too, but not as good as hers.”

When it comes to his own skills in the kitchen, he says, “No, let’s not go there. I don’t want to get caught lying!”