Beyond the Myth of the ‘Black Deadbeat Dad’

Know a good Black father? It’s likely you are acquainted with many. That’s why it’s time to stop perpetuating the “absentee Black daddy” tale. Our real-life experiences tell us something the media doesn’t: Black fathers understand what it means to be hands-on parents. EBONY asked the co-founder of the popular website blackandmarriedwithkids.com to talk about the normal for Black dads.

On a brisk fall day in Park City, Utah, I sat in a pre-meeting for speakers at a business conference. It wasn’t hard to notice I was one of the few faces of color in attendance. Within minutes, the White man seated next to me and I struck up a normal baseline conversation about kids, family and our jobs. As I spoke about being the father of four and, along with my wife, running the largest Black marriage and parenting site on the Internet, I could see his admiration. But then it happened: In a single sentence, he went from congratulating to asking me if I knew any other positive Black dads and men. (Insert record scratch here.)

Compounding this often-negative view of Black fathers, most likely buttressed by the media, little fanfare is given to the statistics that reveal other trends. “We are now seeing that Black men are the most engaged cohort of fathers in the nation,” says Kenneth Braswell, executive director of Fathers Incorporated. “The correct poster of Black dads should portray them as the model of active fathers, rather than the counter narrative of trifling and useless.” In 2011, the Pew Research Center found that 67 percent of Black fathers living apart from their children saw them monthly or more, compared with 59 percent of Whites and 32 percent of Hispanics. Additionally, of dads residing out of the household, 49 percent of Blacks, 30 percent of Whites and 22 percent of Hispanics talked to their children regularly each week.

Black men who live with their kids are also representing in positive ways. According to data published by the Centers for Disease Control and Prevention in 2013, 70 percent of Black dads were likely to have bathed, dressed, diapered or helped toilet train their children every day compared with 60 percent of White dads and 45 percent of Hispanic fathers.

Studies and statistics aside, positive Black brothers don’t live in folklore or on the B-side of Angie Stone albums. They live next door.  They work in the cubicle next to yours. They own the businesses we patronize. Sadly, all too often these are the men who don’t get any shine. Pop culture regales us with tales of dysfunctional rappers and pro ballers with more baby mamas than platinum albums and Pro Bowl selections.

Rather than accepting this as the norm, we should know better. There are groups, like blackandmarriedwithkids.com, seeking to dispel these negative fables. Matt Prestbury’s Facebook page, Black Fathers, which has been featured on The Steve Harvey Show, is doing everything from sharing proud papa pictures to creating strategies for gaining more visitation rights to see kids. And every day, thousands of men not only visit and comment on our website, but they also attend our events, such as the BMWK Marriage Cruise.

I constantly interact with scores of men who are active, engaged parents. Let’s lift up and acknowledge the Black fathers who have collectively raised the bar of excellence. Here are 10 of the most impactful things I see us doing. Pass the word:

We stand up as fathers—even if we didn’t have an example.

The often-ignored part of not having an involved father is that it makes many men try harder to be what they never had.

We use technology for more than gaming.

Understanding the importance of connecting regularly with their children, particularly if they live or work long hours outside of the household, is a priority for Black dads. They check in, by any means necessary: cellphone, FaceTime, Skype.

We make time for memories.

Many Black dads realize the importance of creating moments that children will reflect on forever. They want their youngsters to feel loved and to know that they are important. They invest in big and small moments, developing “dad time” rituals and trips. 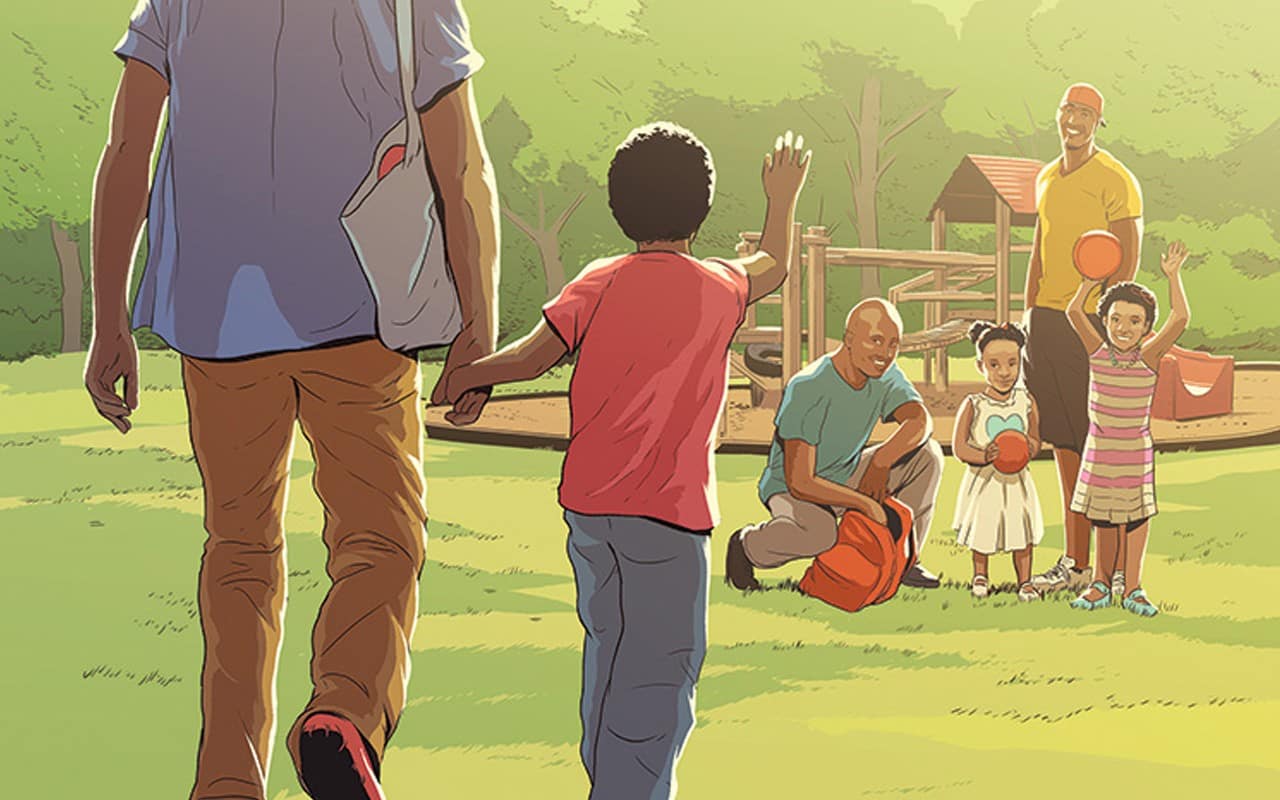 We make the best coaches.

I’ve never met a Black dad who didn’t think he could coach his child to some type of stardom—regardless of his own sports background or lack of one. Watch enough NBA or NFL games and you’re definitely prepared to raise the next LeBron or Cam Newton. Hey, we don’t make the rules, we just play by them.

We get our hands dirty.

We’re not afraid to roll our sleeves up and jump in with bath time, bedtime or trips to the potty. We know that the memories we want don’t start and end with Disney but also include those special moments that happen during our daily routines.

We leverage the superpower of Black dad swagger.

No pajama jeans or fanny packs here. Whether it’s a skinny suit or boots and sweats, Black dads are just cool.

We give love … and pounds.

The Black dad is happy to give a hug, kiss, pound or dap. Depending on the situation, it’s all fair game.

We give more than money.

Financial support isn’t enough. Black fathers know fiscal concerns must be combined with emotional, spiritual and physical involvement. They show up at counseling sessions, churches and extracurricular activities. They are committed to doing what is needed to make sure their children are covered.

We are our children’s protectors.

Black men shield their sons from societal elements that threaten their mental safety. Likewise, they guard their daughters from comparable concerns. The children of Black men know that they don’t play.

We love being fathers.

Black papas embrace the role and relish the opportunity to nurture their children and provide them a life that they may not have had themselves.