McDonald’s found itself the talk of Twitter this morning, but not because of its food. Apparently, the fast food giant got hacked (or some intern went rogue), and the company decided to go off on Donald Trump.

In a now deleted tweet from McDonald’s corporate account, Trump was called a “disgusting excuse of a President” with “tiny hands.” 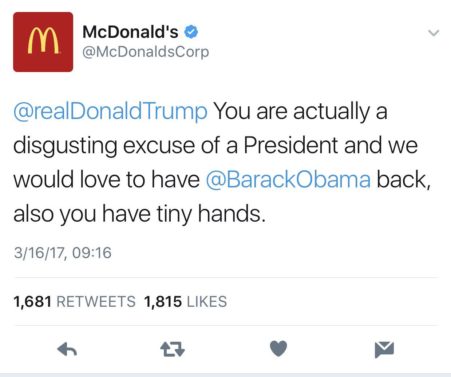 But of course, the Internet never lets anything go quietly into the morning, and the tweet was shared by many on the social media platform, who cracked up at the corporate misstep.

@austin_walker Finally, McDonald's getting in on some real beef.

So, was Micky D’s hacked? Twitter users are the case about who could have done it.

NSA agents have a suspect for the author of the McDonald's tweet pic.twitter.com/kKBL5pISfJ

Trump loves to eat McDonald’s so it’s unclear if he’ll go after the corporation like he recently did with Snoop Dogg.