Entrepreneurship has planted the seed for the creative, unique and even socially awkward to curate a niche and space for like-minded individuals.

EBONY was birthed from the vision of a Black man who desired to keep others informed on the social and societal happenings relating to and about Black people and culture.

For decades, we have found ways to re-imagine spaces and become leaders in various areas. Success stories of Black people circulate year-round, but every year, Allstate Insurance Company kicks off their #WorthTelling digital, social and radio campaign, which highlights and honors everyday individuals who are creating a stronger community through entrepreneurship. In turn, we’re introduced to more community heroes with stories to share.

Among the three features in this year’s campaign is Ariell Johnson, owner of Amalgam Comics & Coffeehouse in Philadelphia.

Johnson made history as the first Black woman to open a comic store in the east coast and started her business as a way to promote diversity and inclusion in the comic book industry.

Often viewed as a “nerd society”, the comic world saw heightened interest as more people of color became included in the story lines. In 2018, we’ll see Ryan Coogler and a gang of leading Black talent bring the Black Panther to the big screen. Not to mention, 2016’s MARVEL’s Luke Cage on Netflix, saw many colored comic fans floss their love for the superhero and immortal world. 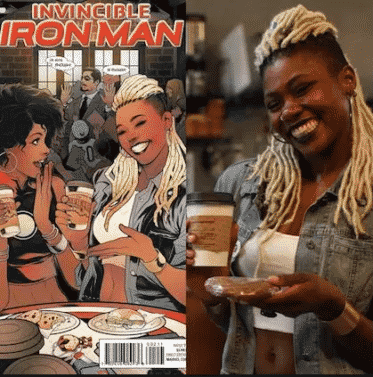 With her vision coming to fruition in 2015, and she becoming a vocal advocate for diversity in the comic community, Johnson’s likeness appeared as an illustrated cover of MARVEL’s Invincible Iron Man # 1.

Isaac White, Sr. – Founder of White’s Barber College (Mobile, Alabama)
Teaching a community how to stay a cut above is #WorthTelling.