EBONY's Power 100 Gala returned to Los Angeles to commemorate those named as a part of this year's cohort. Hosted at Milk Studios in Los Angeles, the momentous event was the culmination of months of dedicated efforts and passion for the fullness of Black culture.

For several decades, EBONY's Power 100 list has uniquely centered Black achievement in ways that sources external to our community have not. This year, awardees spanned categories ranging from Generation Next and STEM Trailblazers to Style Curators. As the event began, a multitude of notable attendees such as Abbott Elementary's Quinta Brunson, comedian and actor Jordan Carlos, multifaceted singer and businesswoman Kandi Burruss and her husband Todd Tucker, cast members from STARZ's P-Valley Nico Annan and Shannon Thornton, and EBONY's August 2022 cover star Bianca Lawson graced the red carpet to share their excitement for the evening, showing off their stunning looks and expressing their joy over being invited into such an illustrious space.

Also appearing on the carpet was EBONY Media's chairwoman and CEO Eden Bridgeman Sklenar who spoke about EBONY's commitment to Black culture and shedding light on all those committed to enhancing our community.

"It's showcasing to everyone the endless possibilities of achievement. All of our awardees and honorees are doing the work so that it makes it possible for us to see ourselves reflected through positive representation so that all of us within our community can then say 'I, too, can make an impact in different ways and mediums," proclaimed Bridgeman Sklenar.

EBONY's Editor-in-Chief and SVP of Programming Marielle Bobo also reflected on the importance of having events like the Power 100 gala.

"Power 100 symbolizes the continuation of EBONY's legacy. The franchise started back in 1979, and we are so proud to be able to continue the legacy the way that we have and include so many amazing people on the list this year. This event exemplifies Black excellence in all of its glory," shared Bobo on the red carpet.

After the carpet ended, guests were transported to an entrancing atmosphere reminiscent of a secret garden. As they waited to be seated, they had an opportunity to partake in delectable hors d'oeuvres, enjoy a tasty cocktail, take pictures in front of several activations including the 2023 Cadillac LYRIQ, EBONY's golden Power 100 logo wall, or Google's "one-of-a-kind" sets and more.

This year, EBONY was honored to have Coke Zero Sugar as presenting sponsor for EBONY Power 100. "This has been an amazing night. To see the star power in the room and how the community comes together in a very focused, purposeful and intentional way in order to move the Black community and culture forward is what Coke is here for," said Henry Hendrix, Vice President of Multicultural Marketing Strategy and Engagement at Coca-Cola North America. "Thank you for having us and allowing us to be the presenting sponsor. We are excited to continue reaching out to touch the Black community in ways that are relevant and meaningful and using Coca Cola as a way for the Black community to find moments of uplift in moments of refreshment."

"We are super excited to be a part of EBONY's Power 100 because this is an event to recognize Black excellence. And as a luxury brand, we want to align ourselves with people that recognize excellence," said EBONY's 2021 Ceiling Breakers awardee and CFO of Baccarat Miriam Vales. "It's unfortunate that we have to create our own events to recognize people that excel in our community, but it just fills me with so much pride and honor—especially as a former awardee—to be part of this event."

As guests were escorted to dinner for the start of the program, they found seating at designated tables denoted by placards with customized handwritten calligraphy under the lush green foliage illuminated by hanging opaque bulbs with tea lights. Each golden table setting also included program booklets with a list of the awardees and honorees along with specialized greetings from sponsors. Comedian and late night host Amber Ruffin gracefully led the program and stunned in multiple outfit changes.

During the event the cast of Black Panther: Wakanda Forever accepted the EBONY Power 100 For The Culture award and revealed EBONY's November 2022 digital cover, which was taken on a Google Pixel 7. During the event and afterparty, Google held a dynamic and breathtaking activation in which attendees could take images in front of the backdrop similar to the one featured on EBONY's November 2022 cover inspired by the land of Wakanda.

"Greatness is a journey. The fact that we get a chance to be on this journey with EBONY is special. The memory of going into a loved one's house and seeing these magazines on the coffee tables is a no different feeling that what is being experienced tonight. The opportunity to be a part of events like these alongside an iconic brand whose legacy has been integral in so many lives that still makes a difference is something we want to continue," said Daryl Butler, Vice President of Marketing, Devices and Services at Google.

One of the most anticipated parts of the evening was paying tribute to our honorees who received gorgeous glass awards that were provided by Baccarat.

Cheryl McKissack Daniel, the President and CEO of McKissack & McKissack—the oldest minority- and woman-owned design and construction company in America—received the Power 100 Black-Owned Business Award and spoke about the value of supporting all types of Black owned businesses globally. Tamika Palmer, the mother of Breonna Taylor, and Wanda Cooper-Jones, Ahmaud Arbery's mother, accepted the Power 100 Social Justice Award and powerfully reminded the audience of the worth of all Black lives. Target Corporation's Senior Vice President of Guest and Brand Experience Marketing Maurice Cooper accepted the Power 100 Corporate Citizen Award and took a moment to speak to supporting Blackness at all intersections of industry. Issa Rae was presented the People's Choice Award by Nia Long and spoke about how necessary it is for our community to receive validation for each other and do the work to further our respective missions. Prolific filmmaker Spike Lee was introduced by actor Roger Guenveur Smith before receiving the Power 100 Icon Award. He reflected on his upbringing and those who paved a way for him to do the work that he is known for today. Lee payed great homage to his grandmother whose social security checks afforded him the privilege to attend Morehouse College and NYU for graduate school.

"The excitement of tonight was palpable. It's a beautiful thing that we can come together and celebrate and support one another. What Issa said about validation in her speech is real," expressed Juanita Slappy, Head of Cadillac Multicultural Marketing of the evening. "We need to get that validation not only from our peers but our businesses. To be a brand like Cadillac is to not only be a sponsor, but it is to help with driving culture forward—forward for the people we work with, like Nyla Hayes who is a Generation Next awardee and Crystal Windham who is a STEM Trailblazer awardee. We know we're doing the right thing and representation matters to the people behind the work and bringing them with us is a reason to celebrate."

Bridgeman Sklenar, who brought the event to a conclusion with closing remarks, reminded the audience of the midterm elections and encouraged them to vote. After that, she invited all in attendance to stay for the after-party in Milk Studios' hangar.

Late night bites and drinks were served as guests fellowshipped and reveled in each other's company at the lit afterparty. The DJ duo Angel and Dren spun a mix of throwback jams, pop hits and Afrobeats. Beam Suntory's Tres Generaciones hosted a luxurious room for folks to enjoy further conversation and tequila cocktails. The spirits brand also offered personalized engraved bottles to attendees to take home. Outside of the venue, Lady M Confections gave out elevated treats wrapped in stunning packaging from a truck display.

Once the evening concluded, guests were given chic black EBONY gift bags which included a bundle of goodies such as a copy of Black Hollywood: Reimagining Iconic Movie Moments gifted by Ally, P&G's My Black is Beautiful Curl Cream & Restorative Mask, plus products from BLK/OPL, The Lip Bar and Scotch Porter, which were gifted by Walmart.

The 2022 Power 100 Gala was a night of exceptional excellence and sincere uplift with energy that will continue to emanate through next year. 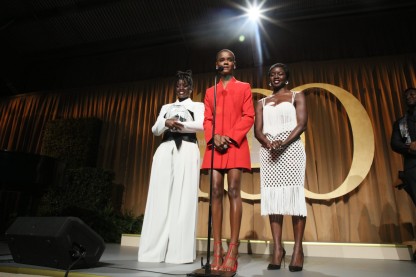 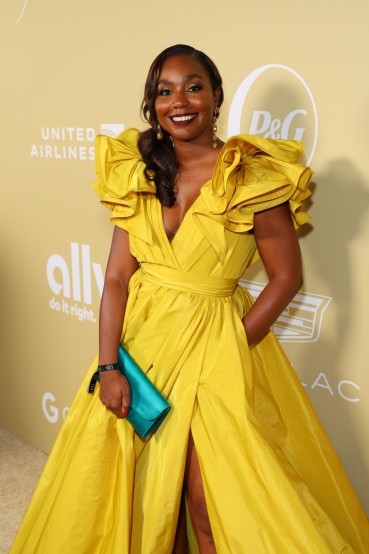 EBONY's Editor-in-Chief and SVP of Programming Marielle Bobo smiles for the camera while on the red carpet. Image: Antoine Debrill for EBONY Media. 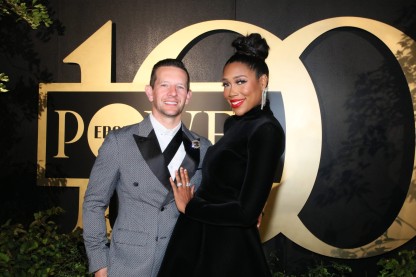 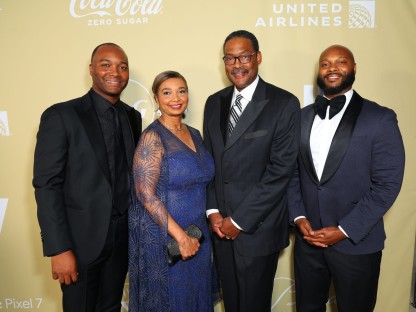 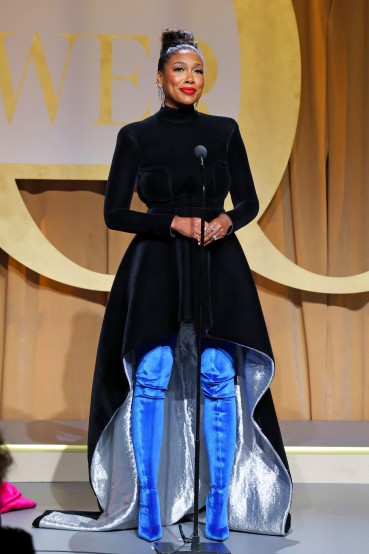 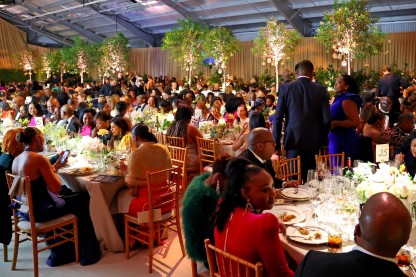 A view of the room. Image: Antoine Debrill for EBONY Media. 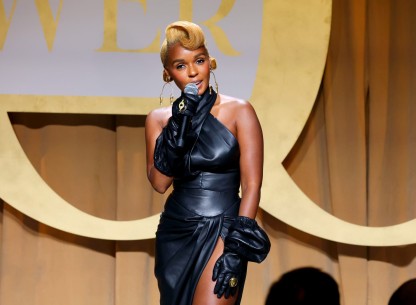 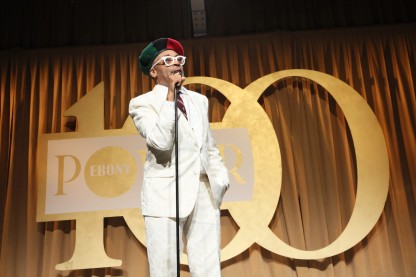 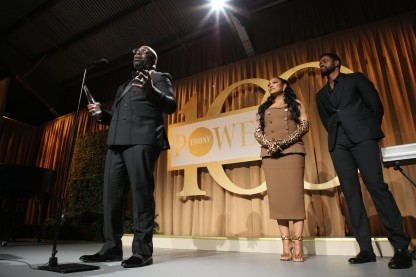 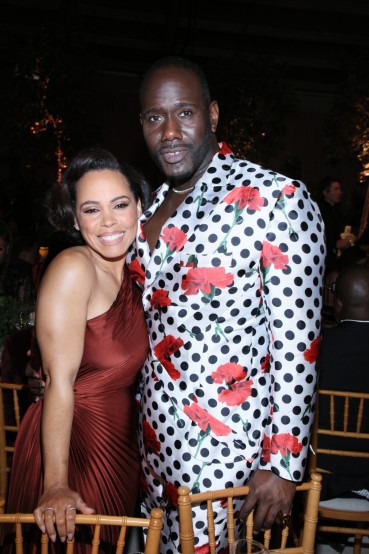 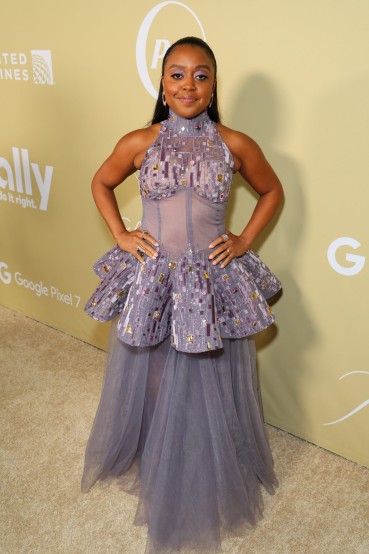 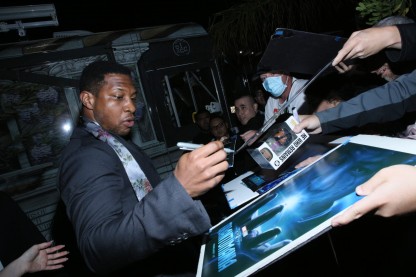 November 25, 2022
Be the first to know
Sign up for the EBONY Newsletter